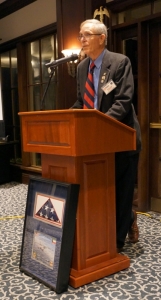 In his presentation Mr. Dickerson spoke on the subject of: “The Consequences of Three Mile Island, Chernobyl and Fukushima Nuclear Power Plant Accidents”. To wit:

Three Mile Island, everything worked as it was supposed to, procedures were followed and radiation release was minimal, no damage done. Included types of gas released and half life of same.

Chernobyl, bad design of Russian reactors was evident. They followed procedure but by the time they started it only made things worse. Massive radiation release, towns around the reactor to house workers were abandoned and are wastelands. The Russians built a containment structure around it which failed and a 1 billion plus dollar structure was built which should last a hundred years.

Fukushima, worked as advertised. There would not have been a problem except for the 20 foot sea wall around the facility was a little short for the 40 foot wall of water from the tsunami. The water washed through the facility, became contaminated then drained into the ground and the Japanese do not know how to get it out.