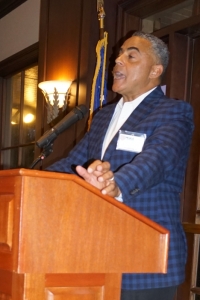 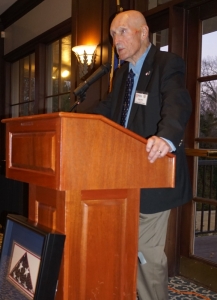 Fulfilling his promise at our 2019 Christmas Dinner Dance, General Gorham and his accomplished wife, Barbara, returned to our meeting. As our guest speaker, the General was able to expand on the lessons he learned from his father, a share cropper farmer from Eastern North Carolina.

Dirt floors and a large family did not hold him or his sisters back in making telling contributions to the State of North Carolina, including as one of the first four black females to integrate the schooling system.

The General made his own impact in the North Carolina National Guard and Banking industry, becoming the first black Brigadier General in the Army Guard and a VP of First Citizens Bank in Kennersville, NC.

Capping the evening, General Gorham submitted his application for membership in our MOAA Chapter.

As part of our membership Service Highlight Speech Series, our Chaplain Glenn MIller recounted a most amusing tale of when he assumed the Conn of his ship during an underway replenishment, while flying his Chaplain's flag at the mast head. A morale raising event that took place during a hard and long deployment off the coast of North Korea.