Click below to follow the link and learn about the latest news and happenings in our Chapter. 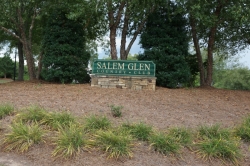 Change of venue for Chapter Meetings

Salem Glen is the new venue for all our dinner meetings beginning on Tuesday, September 13, 2022, with the Board Meeting at 5 PM. Social time begins at 5:45 PM, followed by dinner and a program. Dress for the meetings is business casual: slacks or khakis, open-collar or polo shirt, optional tie, and/or sport coat.

Your Board of Directors spent the summer reviewing several alternative meeting venues.

Research led to the following motion: “In order to reduce costs, have a better meal experience and attract more membership, we move to end our contract with Bermuda Run Country Club in favor of Salem Glen Country Club as soon as possible.” The notion was seconded and approved unanimously. 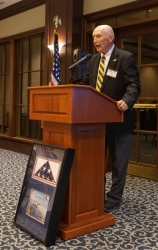 We lost an additional three long term members this year

We are distressed to report that Lt Co. Fred Price passed away on 5 August, 2021. Our second loss within a months time.

Fred was a new member to our Chapter so we were just getting to know him when Covid stopped our meetings. His obituary follows. 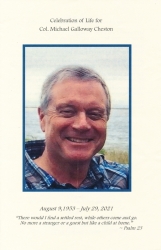 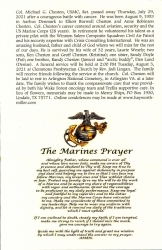 We are deeply saddened to report that Col. Cheston lost his battle with cancer on 29 July, 2021. An especial loss as he and his wife, Captain Laurie Wesely, had only just joined our Chapter in November of 2019. We had been looking forward to integrating them both deeply into the activities of the Chapter.

Attached is the cover and back of the program of remembrance at Clemmons Presbyterian Church, 3 August, 2021.